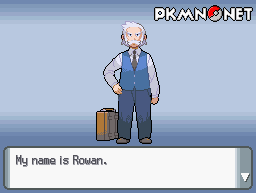 The game begins the way all games do - the new Professor (this time Professor Rowan) introducing himself and introducing the world of Pokémon. You'll be prompted to enter a name for yourself and your rival. At this point your character will shrink and the game begins. You'll find yourself in your room, watching a TV news report about a Red Gyrados. Once finished, head down the stairs (noting how your character is amazing enough to own a Wii). Downstairs, you'll meet your Mum who tells you to go and see your Rival. I'm going to call him James.

Leave the house and head towards your James's house (depending on your gender it's either the top-left or bottom-right house). James will suddenly appear, and run off before re-entering his house. Follow him and head to the second floor, where he'll once again leave. 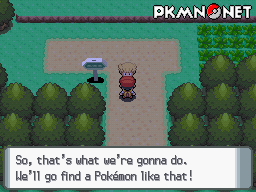 Leave the house and head upwards to Route 201 and you'll see James. He'll talk to you about the Red Gyrados and suggest you both go to check it out. Head westwards and enter the forest where you'll arrive at Lake Verity.

Next to Lake Verity you'll find Professor Rowan and Dawn. After some dialogue the two will leave, but the Professor will leave behind his briefcase. Approach the briefcase and you'll be attacked by a Level 2 Starly. Time to choose your starting Pokémon! 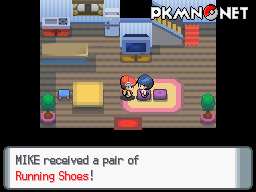 I'm not going to explain how to beat a Level 2 Starly. If you can't do it you shouldn't be playing computer games in the first place. James conveniently takes the mon that is strong against yours. Dawn will then return and take back the briefcase. Leave Lake Verity and you'll bump into Professor Rowan and Dawn again. You'll be taken back Home, where your Mum will tell you to Sandgem Town, as well as giving you the Running Shoes. Now you can run by holding down B!

Simply head East through the grass until you reach Sandgem Town. 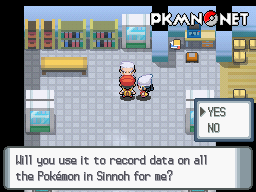 As soon as you enter Sandgem Town you'll spot Dawn, who will lead you to Professor Rowan's lab. The Professor will allow you to keep the Pokémon you chose as your own (and nickname it should you wish). He will then ask you if you would like to travel the land of Sinnoh, helping to collect data on all forms of Pokémon. Answer "Yes" and you'll receive the Pokédex! Dawn will eventually be given the remaining starter Pokémon (which will be weak against yours, excitingly). Leave the lab and Dawn will follow you and take you on a brief tour around Sandgem Town, pointing out the Pokémon Center and the PokéMart.

Now return to your house in Twinleaf Town where your Mum will heal your Pokémon before giving you a Journal. This will allow you to read up on what you've done on your journey. James's Mum will then walk in and present you with a Parcel. She will then tell you to head to Jubilife City to find James and give him the Parcel. 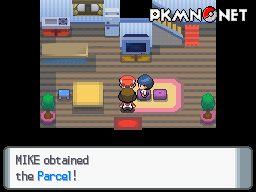